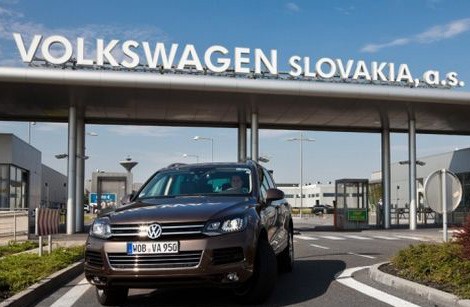 The importance of automotive factory locations in the European Union member states of Central Eastern Europe has steadily increased in recent years.

Automotive facilities in Western Europe have been subject to closure and total employment has been reduced since 2009. However, employment opportunities have been partly re-established in CEE countries, based on the fact that the previously closed factories have been relocated in the recently joined EU member states. As a result of these changes, approximately one in three vehicles are produced within the following EU member states: the Czech Republic, Hungary, Poland,
Romania, Slovakia and Slovenia. Based on manufactured vehicles per capita, Slovakia is the leading producer of vehicles with 180 units per thousand inhabitants, according to the industry association European Automobile Manufacturers’ Association. The Czech Republic ranks second with 108 vehicles and Germany third with 70 vehicles.
Since 2007, Slovakia has been the world’s largest producer of cars per capita with a total of 1,040,000 cars manufactured in 2016 alone. Recently, Slovakia has grown to become one of the leading car producers in world, primarily thanks to the presence of three world-class automotive companies being established in Slovakia: Volkswagen Slovakia in Bratislava (since 1991), PSA Peugeot Citroën Slovakia in Trnava (since 2003) and Kia Motors Slovakia in Žilina (since 2004). In 2018, Jaguar Land Rover is set to open the country’s fourth automobile assembly plant in Nitra.
The automotive components industry in Slovakia has flourished hand in hand with the rise in automotive production. More car component makers are constantly shifting their operations to Slovakia, to the various industrial parks set up near Bratislava, Trnava, Žilina and Martin. Automotive parts production plants have increased the value of their production more than tenfold within the last decade.
Among the important activities of modern automotive industry development can be listed not only the construction of the latest automotive plants with the latest technologies, but also the first initiatives in the development of e-Mobility in Slovakia.
Research and development activities and results in the field of electric vehicles took place at Slovak universities: Technological University in Košice, Slovak Technical University in Bratislava and University of Žilina. Continually developing co-operation with Slovak universities and research centres is also of great significance.
Over 40 of the top 100 global OEM parts suppliers and more than 700 suppliers in the automotive industry in Hungary
Production value of the Hungarian automotive industry amounted to € 25.3 billion in 2016 and has registered a 15.0% growth between 2010 and 2016. The number of people employed in the automotive industry was 155,508 in the 2016 Q4 and accounts for 30.1% of manufacturing industrial output in the first eleven months of 2016, with over 520,000 passenger cars were manufactured in Hungary in 2016 alone.
As a member of the European Union, Hungary’s regulations on incentive opportunities are in accordance with the EU rules. One of Hungary’s competitive advantages over other countries in the region is the Government’s strong commitment to increase the competitiveness of SMEs and large enterprises in Hungary. Alongside the regulatory tools that contribute
to the competitive business environment of local companies, Hungary offers wide-ranging
incentives to facilitate foreign direct investments and reinvestments by local enterprises. Subsidies may be granted as regional aid or specific aid, such as R&D subsidies.
Source: Deloitte; KPMG, HIPA